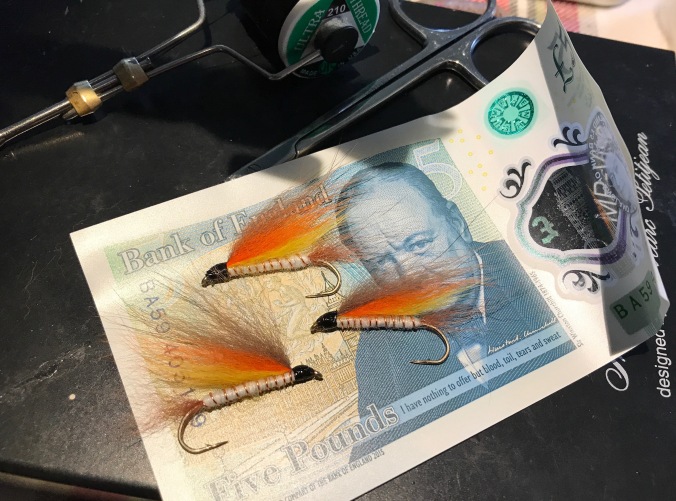 In a few days, Lori and I will be leaving for 11 days in Scotland, where I’m lucky enough to have arranged four days of fishing with two great ghillies–two days on the River Tweed with Stewart Collingswood and two days on the Isle of Skye with Mitchell Partridge.

One of my favorite things is to swing streamer flies for trout (and if I can do it with a snake roll, so much the better). Streamer flies are not traditionally used to fish for trout in Scotland, but I’m not quite a traditionalist. I can think of no reason why a Scottish brown trout wouldn’t take a well-presented streamer, but I figured if I wanted to find out for sure I’d better take a few with me.

As a fly dresser, I’m no Davie McPhail, but I can tie a functional streamer pattern. I don’t know much about what minnows might be available as forage in Scottish rivers and lochs, but anywhere that wild trout live holds trout fry and fingerlings. And trout, after all, are cannibals.

The Little Brown Trout is one of a series of streamer patterns originated by Samuel Slaymaker, and which I first read about as a child in Joseph Bates’ Streamer Fly Tying and Fishing (other flies in Slaymaker’s series include the Little Brook Trout and the Little Rainbow Trout).

Slaymaker’s original dressing calls for a tail of pheasant breast feather and a wing that’s a combination of various colors of bucktail and also squirrel tail. I chose to use Arctic fox for the tail and wing. Arctic fox has much more inherent action than bucktail and is extremely durable. I think the Arctic fox makes a nice Little Brown Trout, but it’ll be interesting to see what the fish think.