Fishing the East Branch of the Westfield River with Chris Stewart and Brad Clark, October 2015

Tenkara is a style of fly fishing imported from Japan (the word tenkara translates to “from the heavens”). The basic tenkara outfit consists only of a rod, a line, a length of leader tippet (5X or smaller), and a simple fly. There is no reel. This is the modernized version of a very ancient game, reminiscent of the angling method Aelian described having witnessed in Macedonia around 200 A.D.

Modern tenkara rods are telescoping rods composed primarily of carbon fiber. Weighing only a couple of ounces, these rods collapse to as short as 12 inches or less. Because of their light weight and their compactness, they have become popular with hikers and backpackers seeking to add a bit of angling to their outings. Tenkara is also becoming popular among those new to fly fishing, as well as those, like myself, who have been fly fishing for years. Tenkara is instinctive in a way that Western-style fly fishing is not. I’m convinced that, regardless of previous angling experience, anyone can pick up a tenkara rod and start catching fish with it in a very short time. The larger rod manufacturers and outdoor retailers are beginning to discover tenkara as well. Temple Fork Outfitters, as well as Patagonia, have begun to sell tenkara rods.

I first stumbled across tenkara (from a clip on YouTube) about six years ago when I was living in South Georgia. As soon as I saw it something clicked inside my head. Over the years I had worked on simplifying my game, and tenkara looked to be the final word in simplicity: fly fishing stripped to its essence. I thought, “Man, I’ve got to try this!” I immediately got on the phone and ordered my first tenkara outfit.

Most New Englanders don’t think of the United States below the Mason-Dixon Line as having trout fishing, but the mountains of North Georgia have some very nice trout fishing indeed. And the Tallulah River, a 47-mile-long stream that begins in North Carolina, was tailor-made for tenkara. (The photo of the small stream that heads each page of this site is a shot of the Tallulah.)

Whenever I’d have a few days off in a row I’d make the five-hour drive from Valdosta to the artsy little town of Clayton, about two hours north of Atlanta. I’d rent an inexpensive room in the center of town. From there it was only a few minutes’ drive to Tallulah River Road. The road begins as a paved road, but then becomes hard-packed dirt, very navigable, with numerous turnoffs where you can park and fish. The road follows the river here for several miles.

The river itself is more accurately described as a small stream, rivaling the most beautiful small streams in New England. The Tallulah has everything a small-stream angler could want: classic pools, plunge pools, riffles, runs, pocket water…. And it has trout. Lots of them. This stretch of the Tallulah is heavily stocked, mostly with browns in the 11- or 12-inch range, but also a few rainbows. I’ve caught wild browns here as well, still with their parr markings. The fishing here is not difficult. I almost never keep count, but I’m sure I’ve had 20-plus-fish days along this stretch. 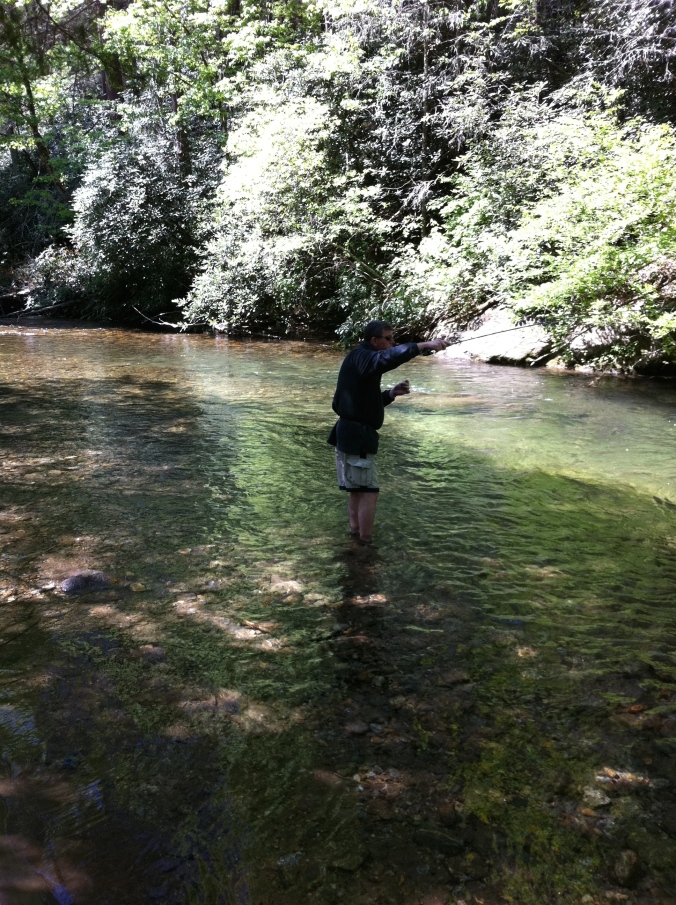 The Tallulah River in North Georgia is a tenkara angler’s paradise.

Some of the most memorable small-stream fishing I’ve had was walking this river with a tenkara rod. Whenever possible, I ditch the waders and wet-wade in a pair of shorts and Vibram FiveFingers. I can fit everything I need for a day of fishing into a five-dollar fanny pack.

The traditional tenkara fly is a very basic wet fly–often only a thread body with a few turns of forward-pointing hackle just behind the hook eye. Tenkara has allowed my fly fishing to come full-circle. I’m now tying flies not much different than the first flies I tied as a child.

A few simple tenkara patterns are all you need.

Western-style trout patterns also work well. I do much of my fishing on the Tallulah with only two flies: an Elk Hair Caddis in size 12 and a simple yellow-bodied soft-hackle wet fly, also in size 12. I’ve never been able to tie dry flies well, and if I tie the caddis myself I omit the hackle. That is, the fly is just a thread body and a wing. I’ve fished the Tallulah every month between March and October, and these crude flies always produce. Other types of flies will also produce, including small streamers. Fishing a small streamer with a tenkara rod is a lot of fun. You can manipulate it in ways you cannot with a Western-style fly rod, make it dart and dash and navigate the stream the way a real minnow might.

When I first visited the Tallulah, the rod I used was 13 feet. After that first trip I bought an 11-footer, which better helped me to avoid the overhanging rhododendrons. The next time I go back I’ll have a 10-footer, and maybe a 9- or an 8-footer as well.

While I’m on the subject of rod length, let me point out, for those of you new to tenkara, that there’s a faction of tenkara anglers who insist that a “tenkara” rod must be of a minimum length. I believe the prescribed  cutoff is 11 feet, but the exact length is irrelevant. These anglers insist that unless the rod is at least of such-and-such a length, it is not a “tenkara” rod, and that what you’re doing when you fish with it is not “tenkara.”

To counter this, there’s another faction that argues tenkara is a style of fly fishing, and it doesn’t matter what length rod you use. I don’t really have a dog in this fight—at this writing, I’m not selling equipment—but I fall into the latter camp, and here’s why:

The rivers in Japan on which tenkara is practiced tend to be very open. Overhanging trees are not an issue, so a rod of 11 to 13 or more feet would be appropriate. However, the small streams I grew up fishing in New England are seldom open. Due to the natural canopy under which these streams tend to flow, many of them could not be fished with a 9-foot rod—you’d simply spend too much time with your rod tip in the tree branches. 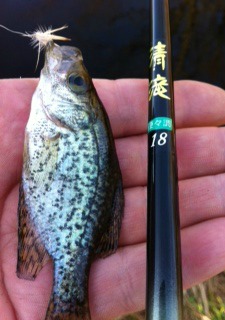 Tenkara–it’s not just for trout anymore.

On these waters an 11-foot rod would be out of the question. So should you skip these streams, or should you adapt to the environment and find a rod you can use…?

For small-stream tenkara-style fishing in New England, I own a number of rods shorter than 11 feet. My smallest rod, a Kiyotaki 18, which I bought from my friend Chris Stewart, the Tenkara Bum, is just 6 feet. It doesn’t even have a cork handle—the graphite simply widens at the grip. Collapsed, it looks like an oversized chopstick. It was not made or marketed as a tenkara rod. Rather, it was made as a micro rod for bait fishing. However, it casts a 6-foot furled or level line very well and is my go-to rod for small streams, tight quarters, and wild native brook trout.

The Kiyotaki 18 is my go-to rod for small-stream brookies.

I own a number of rods that are not—technically—“tenkara” rods but that cast and fish as well as any of my dedicated tenkara rods do. Is what I’m doing when I fish with them “tenkara”…? I’ll leave that for you to decide.

Regardless of whether or not you call it tenkara, fixed-line fly fishing is a simple, economical, very productive, and tremendously fun way to fish for trout and panfish on moving water as well as ponds and lakes.

For more specific information on tenkara, visit Chris Stewart’s excellent site: www.TenkaraBum.com. To read my post on fishing for small-stream brook trout in New England, which first appeared as an article in the Fall 2016 issue of Tenkara Angler Magazine, click here.